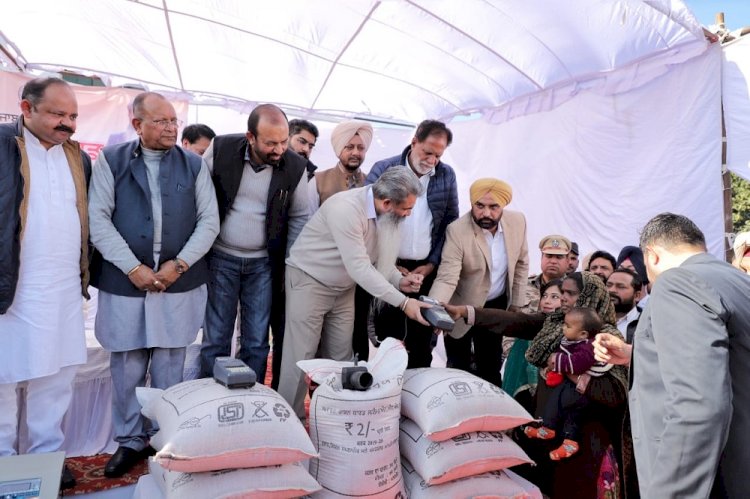 Cabinet Minister Mr Bharat Bhushan Ashu handing over wheat bag to a beneficiary after inaugurating PDS wheat distribution in the state, from a function being organised at Ludhiana on Wednesday..

Ludhiana: Punjab Food, Civil Supplies and Consumer Affairs Minister Mr Bharat Bhushan Ashu today said that the Capt Amarinder Singh led Punjab government would be providing sugar and tea leaves at subsidised rates to the smart ration card scheme beneficiaries shortly. He said that the plan in this regard has already been finalised by the Food, Civil Supplies and Consumer Affairs department and the file would be put up with the finance department soon.

Mr Ashu said this while inaugurating the distribution of PDS wheat through ePOS machines to smart ration card scheme beneficiaries, at a function held at village Barewal, near here today.

While addressing the gathering, Mr Ashu said that under the Smart Ration Card scheme, around 1.37 crore residents from around 35 lakh families of the state are getting subsidised wheat. In district Ludhiana alone, wheat is being distributed to 3.89 lakh families in a transparent manner with the help of ePOS (electronic point of sale) machines.

He said that the distribution of subsidised wheat and pulses was a brainchild of former prime minister Dr Manmohan Singh, who in the year 2013, introduced the Food Security Act. He said that ever since the Capt Amarinder Singh led government was formed in the state, a thorough survey to weed out ineligible beneficiaries was carried out and distribution of wheat and pulses was started through ePOS machines.

Mr Ashu further informed that around 48,000 new families have been added under this scheme in district Ludhiana alone. He informed that even weighing scales have been kept at all places where wheat is being distributed so that no person is exploited by anyone. He assured that the Punjab government is committed to fulfil all its promises made with the people at any cost.

Mr Bharat Bhushan Ashu informed that the beneficiaries get wheat in 30 kg sealed bags at Rs 2 per kilogram twice a year. Also, 500 gram of pulses are being distributed per person per month to eligible individuals at Rs 20 per kilogram. The leakages have been plugged by the government and it is committed to ensure delivery of food grains to all genuine beneficiaries, he said.